In our minds, this is a next generation, best in class office development capable of attracting the best people for the best tenants who will enjoy it both from the outside looking in, and especially from the inside looking out.

Initial analysis of all buildings on site, in conjunction with conservation expertise, informed a selective approach to conserving key significant cultural elements on the site, notably Penrose House , the re-use of old Cork limestone and sandstone from warehouse walls, to the expression of the new buildings as long, deep North-South Linear footprints to reference the original historic plot patterns found on site.

Penrose House forms a key centre piece to the new development. It’s Architectural value is enhanced by the elegant backdrop of the proposed scheme, and which gives it a ‘stand alone’ status on this important corner of the site. The building is separated from the proposed development by new permeable pedestrian passage ways which will draw users into the new central plaza which will be an exciting urban focal point. The proposed new streets off Penrose Quay, the rear wall to Penrose House and the new plaza area will present the opportunity to re-use the existing limestone walling in a creative reference to the original dockside warehouses that previously occupied the site.

The Masterplan arrangement is set out in two distinct building arrangements.

Building 1 : off Penrose Quay adjacent to Penrose House is organised in a formal ‘pavilion’ type form , with classically arranged proportions to its form and elevation treatment. The Strong Architectural expression is organised in 3 distinct modules vertically across the façade. The base ‘plinth’ module is three storey with set back glazing elements to provide a grounding to the pavilion which supports two double floor modules above containing vertical glazing elements spanning both floors. This provides a clear classically proportioned expression and gives the river frontage building a sense of prescience and permanence consistent with the design intent of Penrose house. De-scaling mechanisms of ‘Notching’ the façade grid is incorporated on the East and West facades to the building to enhance its scale relationship.

Building 2: to the rear of Penrose House , employs the same façade discipline as  Building 1 ,to provide a framing approach to the historic centre piece building. This façade consistency provides the site with a unique urban feel and further highlights the retained Heritage element as the centre piece. Buildings B’s scale presents onto the plaza at scale to form a strong urban quality to the formal plazas confluence of access streets. Again through set backs , Notching and massing breakup, the building presents as a number forms ,all working to address different scale scenarios presented around its perimeter. The entrance off Railway street has scale broken up to express the plinth element presenting more visibly to the South of Penrose House , while the corner of Railway street and Alfred street is expressed as a strong nodal point at the entry point to the proposed Horgan’s Quay development. This Main building is organised around a central atrium with this expressed externally in curtain walling. It’s curtainwall forms the ‘break’ point to the various massing scales carried around all four facades.

The central Plaza provides the stage for all these three building elements to act in concert with the addition of a glazed curved entrance pavilion to the rear of South which draws users across the space. The landscape is a mix of soft and hard landscaped elements with a water feature to the South of Building B. 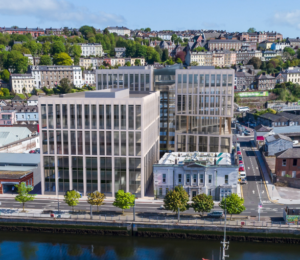 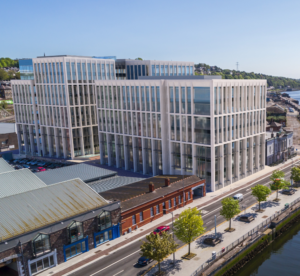 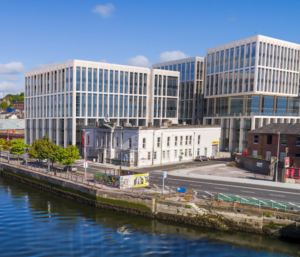